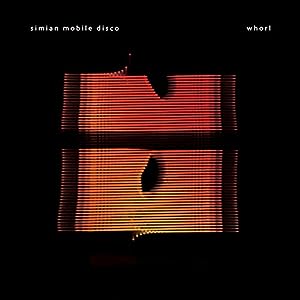 $4.83
As of 2022-09-16 03:48:50 UTC (more info)
Not Available - stock arriving soon
Buy Now from Amazon
Product prices and availability are accurate as of 2022-09-16 03:48:50 UTC and are subject to change. Any price and availability information displayed on http://www.amazon.com/ at the time of purchase will apply to the purchase of this product.
See All Product Reviews

Every musician needs to take action to keep themselves fresh from time to time, but James Ford and Jas Shaw of Simian Mobile Disco have really gone to extremes this time: they've completely abandoned every tool they previously used to make music. For the recording of their 2014 record, Whorl, they've started from the ground up and created an entirely new electronic system, and recorded everything entirely live, from scratch. Over the years as members of the criminally underrated "prog-psychedelic band" Simian, as one of the UK's finest electronic duos, and individually as esteemed producers for other acts James and Jas have accumulated mountains of incredible vintage synthesizers and other general sound-making boxes. Limiting themselves to two suitcase-sized boxes each no laptops, no racks of hardware, just one synth and one sequencer each they headed into the high desert of Joshua Tree National Park in California and recorded Whorl in front of an audience.

The result is something that takes you right into the heart of their creative processes, veering from completely abstract ambient explorations through buoyant repetitions that float into the territory of the most cosmic German and Italian synth explorers of the 1970s and 80s, then take flight into otherworldly techno grooves. It's not a sound that punches you in the face with its newness or weirdness the album draws you in gently with the truly beautiful airborne, beat-free opening passage of "Redshift" and "Dandelion Spheres, " and each track thereafter is subtle, rarefied and elegant. Says James, "Whorl can be taken as one long piece, because in the performance of it, we've gone where the processes we've set up have taken us. " And he's completely right it's as a whole that Whorl comes to life and really opens up its secrets and surprises. It's a truism that you should expect the unexpected from SMD, but this time round you can be damn sure of it, as they've created a system to ensure that it's precisely the only thing you can expect.

State of Trance at Ushuaia