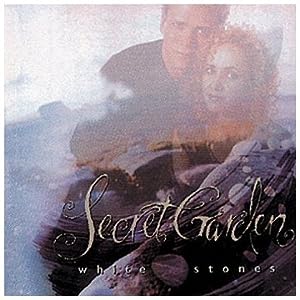 $5.77
As of 2022-09-18 02:24:30 UTC (more info)
Not Available - stock arriving soon
Buy Now from Amazon
Product prices and availability are accurate as of 2022-09-18 02:24:30 UTC and are subject to change. Any price and availability information displayed on http://www.amazon.com/ at the time of purchase will apply to the purchase of this product.
See All Product Reviews

Two factors account for the broad-based popularity of Secret Garden (the duo of Norwegian keyboardist Rolf Lovland and Irish violinist Fionnuala Sherry). One: the twosome's attractive, smartly conceived mix of compatible elements including light classical, urbane New Age, and well-mannered contemporary Celtic. Two: the pair's ability to persuasively present this formula with poise and (crucially) fetching good looks in a concert film, which in 1999 enjoyed broad exposure on American public television. (The performance, A Night with Secret Garden, is available on DVD.) White Stones is Lovland and Sherry's second collaboration, and, despite a few side trips into weighty sentimentality (e.g., the heart-clutching earnestness of "First Day of Spring"), it nicely conveys the pair's simple yet endearing children-of-the-cosmos spirit. Highlights here include the disc's energized, Celtic-influenced tunes ("Steps," "Moving," "Escape") and an infectious, regal charmer ("Celebration") Lovland composed in honor of the Queen of Norway's 60th birthday. Accompanied on nearly every piece by a small orchestra or Celtic instrumentalists, Sherry's violin sometimes evokes moods of melancholy that seem better suited for a two-hanky, movie-of-the-week film score. Yet a piece such as "Hymn to Hope" shows she can also elegantly trigger deeper feelings of longing and anticipation that can linger for hours. Overall, a worthwhile listen. --Terry Wood

Yesterday Once More: A Tribute to the Mu...