Whatever People Say I Am, That's What I'm Not (Exclusive Smoke Color Vinyl) 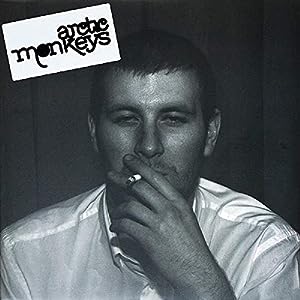 Whatever People Say I Am, That's What I'm Not (Exclusive Smoke Color Vinyl)

$59.99
As of 2021-05-30 20:45:40 UTC (more info)
Not Available - stock arriving soon
Buy Now from Amazon
Product prices and availability are accurate as of 2021-05-30 20:45:40 UTC and are subject to change. Any price and availability information displayed on http://www.amazon.com/ at the time of purchase will apply to the purchase of this product.
See All Product Reviews

Whatever People Say I Am, That's What I'm Not Limited Vinylmeplease Club Edition Vinyl LP
Whatever People Say I Am, That's What I'm Not is the debut studio album by English rock band Arctic Monkeys, released on 23 January 2006 by Domino. The album surpassed Elastica's self-titled album to become the fastest selling debut album in British music history, shifting over 360,000 copies in its first week, and remains the fastest selling debut album by a band. It has since gone quintuple platinum in the UK.
It is the only album to feature Andy Nicholson as bass player before he was replaced by Nick O'Malley. The album includes both tracks from the band's original EP, Five Minutes with Arctic Monkeys, as well as their first two singles and UK number ones, "I Bet You Look Good on the Dancefloor" and "When the Sun Goes Down". It is often cited as one of the best rock albums of its decade. It received the 2006 Mercury Prize for Best Album, and was ranked number 371 on Rolling Stone's 500 Greatest Albums of All Time.
In 2013 Rolling Stone ranked it the 30th greatest debut album of all time. In October 2013, music magazine NME also ranked the album at number 19 in their poll of the 500 greatest albums of all time.

Tracklisting
1 The View From The Afternoon
2 I Bet You Look Good On The Dancefloor
3 Fake Tales Of San Francisco
4 Dancing Shoes
5 You Probably Couldn't See For The Lights But You Were Staring Straight At Me
6 Still Take You Home
7 Riot Van
8 Red Light Indicates Doors Are Secured
9 Mardy Bum
Mixed By - Barny, Jim Abbiss
Producer - Alan Smyth
Recorded By - Andreas Bayr

10 Perhaps Vampires Is A Bit Strong But..
11 When The Sun Goes Down
Recorded By [Additional Recording] - Alan Smyth

12 From The Ritz To The Rubble
13 A Certain Romance