What The Hell Happened To Me? 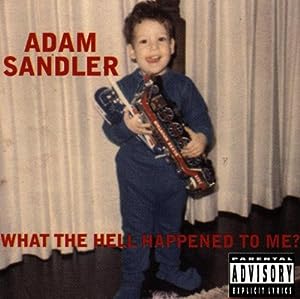 What The Hell Happened To Me?

$33.91
As of 2022-10-03 20:26:26 UTC (more info)
Not Available - stock arriving soon
Buy Now from Amazon
Product prices and availability are accurate as of 2022-10-03 20:26:26 UTC and are subject to change. Any price and availability information displayed on http://www.amazon.com/ at the time of purchase will apply to the purchase of this product.
See All Product Reviews

Adam Sandler--Saturday Night Live MVP, movie star and all-around swell guy--follows the success of his debut album, They're All Gonna Laugh At You, with a collection of sketches and songs that's even more uproariously funny than the first one. Certified double platinum by the RIAA 2/99.

If Sandler had shelved about half the material on this bloated 75-minute disc, he would have done the listener a big favor. At times, the relentless, one-note routines actually work. Sandler gets plenty of mileage out of fart after fart on "The Hypnotist." And every time the wise guys on "Respect" mumble that word, the funnier it gets. But too many skits go on forever. Lacking dramatic shape, they just hammer away at worn-out riffs. The five "Excited Southerner" tracks could certainly have been dumped. Sandler and his cowriters apparently think that the excited Southerner's stutter is enough to make these bits funny. Besides the dozen-plus comic routines, the disc contains seven songs, five of which feature full-blown musical productions and L.A. studio musicians. The standout number is "The Chanukah Song," one of two live recordings that feature a solo Sandler accompanying himself on guitar. --Fred Cisterna

only $8.55
Not Available
View Add to Cart