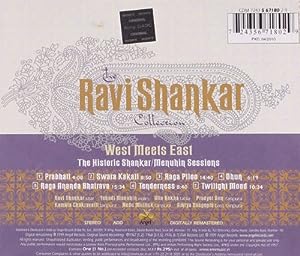 $8.18
As of 2023-02-01 05:45:21 UTC (more info)
Not Available - stock arriving soon
Buy Now from Amazon
Product prices and availability are accurate as of 2023-02-01 05:45:21 UTC and are subject to change. Any price and availability information displayed on http://www.amazon.com/ at the time of purchase will apply to the purchase of this product.
See All Product Reviews

Without renowned violinist Yehudi Menuhin, the West may not have found Indian classical music until decades later, much beyond the late 1960s. Thanks to Menuhin's chance meeting and later lasting friendship with the master sitarist Ravi Shankar, the West witnessed the sublimity that the merging of Western and Indian classical music could produce. The two collaborated in key performances during the late 1960s and mid-1970s, the highlights of which are captured here on West Meets East. In an incredible, interwoven dance between violin and sitar, Shankar and Menuhin spin a new yarn from the wool of ancient and rare Indian ragas, capturing the ecstasy of Hindustani praise while spontaneously bringing forth their own voices in the music. Menuhin's violin sings in beautiful sadness alongside Shankar's twanging sitar amid the droning of tanpura and occasional tabla rhythms. It's as if the two greats are playing a game of tag, taking the other's notes and stretching them into their own inspired shapes while creating a timeless music where love and respect swirl up like blessed smoke. --Karen H. Hugg

Dub Side of the Moon