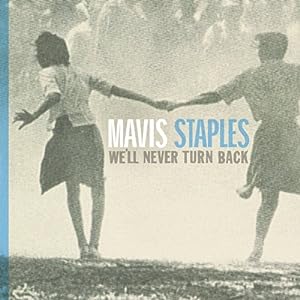 $10.87
As of 2023-01-29 02:48:56 UTC (more info)
Not Available - stock arriving soon
Buy Now from Amazon
Product prices and availability are accurate as of 2023-01-29 02:48:56 UTC and are subject to change. Any price and availability information displayed on http://www.amazon.com/ at the time of purchase will apply to the purchase of this product.
See All Product Reviews

Soul and gospel legend Mavis Staples possesses one of the most recognizable and treasured voices in contemporary music. From her early days sharing lead vocals with her groundbreaking family group, the Staples Sisters, to her powerful solo recordings, Mavis Staples is an inspirational force in modern popular culture and music.

As musical activists in the 1960s civil rights movement, the Staple Singers were powerful voices for equality and change. And more than 40 years after Pops's daughter Mavis spent a night in a West Memphis, Arkansas, jail at the behest of a racist cop, she still remembers the terror of the experience, as well as the counsel of Dr. Martin Luther King. That episode is at the centerpiece of "My Own Eyes," one of the most moving offerings on this collection of songs of racial struggle in the '50s and '60s, produced by guitarist Ry Cooder and featuring backing from the original Freedom Singers and Ladysmith Black Mambazo. Throughout, the album proves both emotionally chilling and spiritually uplifting. On J.B. Lenoir's "Down in Mississippi" and Marshall Jones's "In the Mississippi River," for example, Cooder makes fine use of pounding percussion and snaky electric guitar to capture the danger and fear inherent in the Deep South at the time, while the title song and "Jesus Is on the Main Line" draw on gospel and the traditional framework of church hymns to promise positive solutions. Staples, who adlibs on several cuts, connecting the injustice of yesterday to the continuing marginalization of blacks in the wake of Hurricane Katrina, remains a remarkable performer, employing a throaty sensuality that rises from a deep well of tremulous emotion. If her album is musically uneven at times, her artistry and strength continue to shine as undimmed beacons. --Alanna Nash

More from Mavis and the Staple Singers

Joy In the Camp