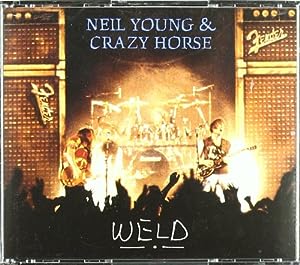 $8.28
As of 2021-10-02 11:20:49 UTC (more info)
Not Available - stock arriving soon
Buy Now from Amazon
Product prices and availability are accurate as of 2021-10-02 11:20:49 UTC and are subject to change. Any price and availability information displayed on http://www.amazon.com/ at the time of purchase will apply to the purchase of this product.
See All Product Reviews

Live Rust gets the most props, but if you're looking for a live document of Neil Young and Crazy Horse at their speaker-shredding, stage-scorching best, Weld is an absolute must-own. Fired up by the success of 1990's Ragged Glory, and outraged by the eruption of the Gulf War, Young and his cohorts attacked their 1991 tour like men on a suicide mission. An angry, gunshot-laced version of Dylan's "Blowin' in the Wind" is the closest thing here to an acoustic reverie; the rest of the album offers up staggeringly intense electric versions of Neil songs both current ("Crime in the City," "Love to Burn," "Rockin' in the Free World") and classic ("Cortez the Killer," "Cinnamon Girl," "Powderfinger"). The back-cover photo of a disheveled Young cradling a broken-stringed guitar pretty much says it all--no one could have unleashed a sonic onslaught this brutal, and emerged unscathed from the experience. --Dan Epstein