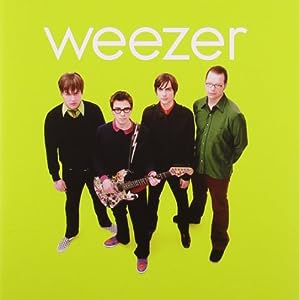 $5.78
As of 2021-04-10 06:39:52 UTC (more info)
Not Available - stock arriving soon
Buy Now from Amazon
Product prices and availability are accurate as of 2021-04-10 06:39:52 UTC and are subject to change. Any price and availability information displayed on http://www.amazon.com/ at the time of purchase will apply to the purchase of this product.
See All Product Reviews

Weezer, those geek rockers who topped mid-'90s charts with those oh-so-precious pop fables "Undone (The Sweater Song)" and "Buddy Holly," were almost undone by 1997's bombastic Pinkerton. Their sophomore release turned its back on the band's clean-cut debut, with a thrash approach more influenced by Sabbath and Kiss than the Beach Boys. On their third album (self-titled, like their first, but referred to as the "Green Album"), the band makes a concentrated effort to return to anthemic '60s punky pop, demonstrating that, for Weezer at least, it's rather easy being green. In fact, one could say they're almost as green as Green Day, especially on "Knockdown Dragout." At their best, Weezer show such boundless energy and gleeful aplomb that you'd swear you were listening to a lost Badfinger album. Conversely, Rivers Cuomo's twisted genius makes its way onto the anxious and paranoid "Hash Pipe" and the jittery "Glorious Days," making the "Green Album" the most absorbing and rounded vision from these pop masters yet. --Jaan Uhelszki

only $5.15
Not Available
View Add to Cart

Dreaming Out Loud from Interscope Record...