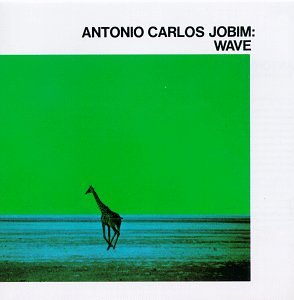 $7.99
As of 2022-09-29 00:15:23 UTC (more info)
Not Available - stock arriving soon
Buy Now from Amazon
Product prices and availability are accurate as of 2022-09-29 00:15:23 UTC and are subject to change. Any price and availability information displayed on http://www.amazon.com/ at the time of purchase will apply to the purchase of this product.
See All Product Reviews

1967 album from the Brazilian musician and composer. Wave is a collection of 1967 dates featuring keyboardist Jobim backed by an extensive orchestra.

It's hardly a stretch to say that Antonio Carlos Jobim--the wonderful Brazilian composer almost single-handedly responsible for all things bossa nova--influenced some of past half century's best and most insipid musics, from bossa nova jazz to elevator Muzak. Wave, a collection of 1967 dates featuring keyboardist Jobim backed by an extensive orchestra, straddles that line: it's full of amazing original compositions, but the arrangements have a certain faux suave, late-'60s lounge feel that reeks of stale cheese. The result is actually great, the veneer of kitsch insidiously masking Jobim's trademark immeasurable sadness, which creeps up on you and leaves you unexpectedly affected. --Keven McAlester