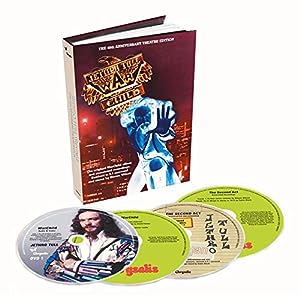 In 1974, Jethro Tull announced plans for WarChild, a multi-faceted project that was to encompass a feature-length film, a soundtrack album, as well a new album from the band. In October of that year, Tull released a 10-song album that would climb to #2 in the U.S. and the top 15 in the U.K., but the film and accompanying soundtrack were shelved. To commemorate the 40-year anniversary of this ambitious experiment, Parlophone revisits WarChild.

WARCHILD: THE 40TH ANNIVERSARY THEATRE EDITION will be available as a limited edition 2-CD/2-DVD set on November 25 2014.

Highlights from the set include:
- Original album and bonus tracks (three previously unreleased), remixed in 5.1 surround and stereo by Steven Wilson.
- 10 orchestral pieces (nine previously unreleased) written for the film s soundtrack, 4 of which are remixed in 5.1 surround and stereo by Steven Wilson.
- Flat transfers of the original LP mix at 96/24, and the quadrophonic version (with 2 bonus tracks) in 4.0.
- The Third Hoorah promo footage, and footage from a January 1974 photo session/press conference where the WarChild project was announced.
- An 80-page booklet featuring an extensive history of the project, a film script synopsis, track-by-track annotations by Ian Anderson, plus rare and unseen photographs.