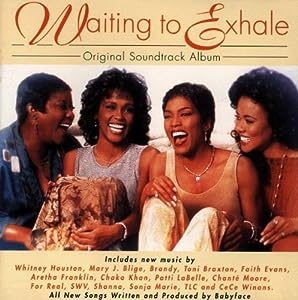 $2.98
As of 2022-11-27 10:57:13 UTC (more info)
Not Available - stock arriving soon
Buy Now from Amazon
Product prices and availability are accurate as of 2022-11-27 10:57:13 UTC and are subject to change. Any price and availability information displayed on http://www.amazon.com/ at the time of purchase will apply to the purchase of this product.
See All Product Reviews

Waiting to Exhale is the exception that proves the rule about mish-mash '90s soundtrack albums. Even though it features 22 different female voices, the album boasts a rare continuity because Babyface wrote or cowrote 15 of the songs and produced all 16. Moreover, the gifted R&B artist used every song to explore the film's theme of women trying to balance self-respect and romantic desire. Not only has Babyface (nee Kenny Edmonds) created a fascinating song suite, he has produced one of the best middle-of-the-road-pop, adult- contemporary albums of the decade. Mary J. Blige stakes out a claim as the new diva on the block with an astonishing performance on "Not Gon' Cry." Babyface's music and lyrics suggest a woman barely holding back a swelling flood of anger and heartache, and Blige's brilliant vocal captures both the agitation and the restraint. --Geoffrey Himes