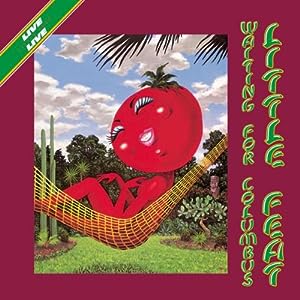 $11.96
As of 2022-09-28 06:38:47 UTC (more info)
Not Available - stock arriving soon
Buy Now from Amazon
Product prices and availability are accurate as of 2022-09-28 06:38:47 UTC and are subject to change. Any price and availability information displayed on http://www.amazon.com/ at the time of purchase will apply to the purchase of this product.
See All Product Reviews

This 1978 live album remains a serious contender for one of the best live rock albums ever etched, standing toe to toe with live classics from the Band, Allman Brothers, and the Who. Recorded during concerts in London and Washington, D.C., Waiting for Columbus vividly captures the L.A. sextet at a crossroads between its swampy mid-'70s fusion of blues, country, and New Orleans R&B, and the more eclectic jazz accents introduced later in the decade. If the late Lowell George's influence had diminished in the studio, his presence dominates here in rowdy, righteous vocals, the mercurial tang of his indelible slide guitar, and a set-list laced with his songs. While still riveting in its initial, abridged CD release, this remastered two-disc edition expands and resequences the songs into a full concert set, with encore. Two deleted tracks are further augmented by 10 additional performances to make this a definitive edition of a classic album that really will "boogie your speakers away." --Sam Sutherland