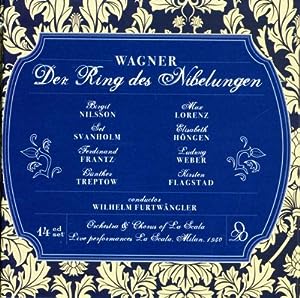 $63.95
As of 2021-07-18 07:49:14 UTC (more info)
Not Available - stock arriving soon
Buy Now from Amazon
Product prices and availability are accurate as of 2021-07-18 07:49:14 UTC and are subject to change. Any price and availability information displayed on http://www.amazon.com/ at the time of purchase will apply to the purchase of this product.
See All Product Reviews

This 1950 performance is the only live complete recording of The Ring conducted by the legendary Wilhelm Furtwängler. Although it has been available on several labels in the past, this is its first appearance at budget price. At last, this "crucial, living document," as opera critic Robert Levine called it, has been made affordable by Opera d'Oro!

"Wilhelm Furtwängler was the ultimate Ring experimenter, the bender of bar-lines, the constructive thief of time, the manufacturer of extraordinary tempo and dynamic gradations. Leitmotifs are integral hints in the musical structure rather than stick-out signposts. Limpet-like attention to the drama is achieved by timing and musical tension. With the Italian orchestras of his only post-war Rings Furtwängler eschews virtuosity in favour of speeds and effects where all the notes can be clearly played. These performances were cast as if the singers were instrumentalists. Furtwängler could have had Hans Hotter, but he took Ferdinand Frantz, the `straighter' less word-colouring singer. He stuck with Flagstad in 1950 for her grand, unfussy vocalisation of Brünnhilde...essential vocal listening." -- Gramophone

Once Upon a Christmas

only $2.83
Not Available
View Add to Cart

only $9.29
Not Available
View Add to Cart