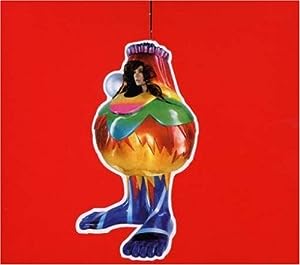 $4.79
As of 2023-02-01 05:44:42 UTC (more info)
Not Available - stock arriving soon
Buy Now from Amazon
Product prices and availability are accurate as of 2023-02-01 05:44:42 UTC and are subject to change. Any price and availability information displayed on http://www.amazon.com/ at the time of purchase will apply to the purchase of this product.
See All Product Reviews

Bjork returns to her iconic, innovative and rhythmic roots with Volta. Featuring her own infamous beats and collaborations with Timbaland, Antony Hegarty, Brian Chippendale and an all-female Icelandic brass section, the end result is an explosion of beats and an amalgamtion of sound and visuals that give Volta a life of its own, like the world hasn't seen from Bjork in years.

Björk's main asset as a musician is her fearlessness. Since the end of The Sugarcubes and the pop-dance of Debut, she has released progressively more experimental records. But after well over a decade of going further and further out, Volta steps back. Make no mistake; this is Björk, and so it's still fabulously weird. Like 2004's mesmerizing Medúlla and the 2005 soundtrack for Drawing Restraint 9, the songs are blissfully peculiar, with narratives about love, offspring, aliens...you name it. Yet melodically and philosophically, Volta recycles more than it innovates; the driving pulse of "Declare Independence," for instance, reminds us of Homogenic's "Pluto," and the lead single "Earth Intruders" sounds like Post's "Army of Me" on steroids. And just as Medúlla oriented itself around a certain instrument--the human voice--this one concentrates on horns.

Still, the transition between her early work and the avant-garde bender she's been on since Vespertine is pretty harrowing, and it's satisfying to hear Björk revisit her more accessible self. Uber-producer Timbaland pitches in here and there, most successfully on "Innocence," which uses a fat, disjointed pulse to drive the euphoric vocals forward. Elsewhere, the hyperactive sitar sample on "I See Who You Are" provides texture for the song's theme of enjoying each other while there's still "flesh on our bones." And "Pneumonia" makes fantastic use of the horn section with a soft arrangement that compliments the song's lyrical melody.

So while it's a bit of a stall, Volta is a lovely pause. It reminds us how much we appreciate the laboratory of Björk’s imagination, but also how much we missed her back when she was just goofing around. –Matthew Cooke