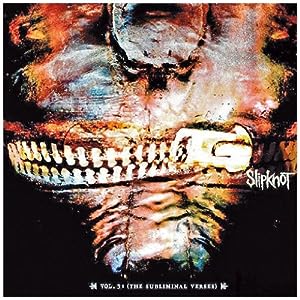 $5.80
As of 2021-09-16 13:43:44 UTC (more info)
Not Available - stock arriving soon
Buy Now from Amazon
Product prices and availability are accurate as of 2021-09-16 13:43:44 UTC and are subject to change. Any price and availability information displayed on http://www.amazon.com/ at the time of purchase will apply to the purchase of this product.
See All Product Reviews

Description of Vol. 3: The Subliminal Verses by Roadrunner Records

Top40 Music Store are delighted to stock the brilliant Vol. 3: The Subliminal Verses.

With so many available right now, it is good to have a name you can recognise. The Vol. 3: The Subliminal Verses is certainly that and will be a superb acquisition.

For this reduced price, the Vol. 3: The Subliminal Verses is highly recommended and is a regular choice for most people. Roadrunner Records have provided some nice touches and this results in good value.

Within the confines, or lack thereof, of VOL. 3: (THE SUBLIMINAL VERSES) lies a new level of musicianship, achieved through the hard work poured into supporting their self-titled debut and their subsequent hit album, IOWA. Produced by Rick Rubin, Vol 3 not only captures the band’s strengths to this point- it sees the spore that is Slipknot exploding in all directions. The songs on this daring effort transcend traditional hard music structure, and will surprise the uninitiated with their dynamic appeal. Masterful guitar work, visceral drum beats, and a newly-expanded vocal range are highlights of this work that Corey Taylor (#8) calls "both brutal and beautiful." Much of the creative inspiration in evidence on the new album is owed to Rubin and his reputedly- haunted mansion, in which the band lived while recording VOL. 3: (THE SUBLIMINAL VERSES). "You can really feel (the effect of the mansion) on the album. There were ghosts in the machine, in the equipment! . Things would freeze, things would loop for no reason at all. It was strange," adds Taylor. Paul Gray (#2) comments on what Rubin brought to the table… "Rick brought a huge amount of open mindedness - normally 9 different people trying different things can be tough - Rick got us to just throw all our preconceived notions out the window. He was able to integrate bits and pieces of everyone's ideas."

The first single off VOL. 3: (THE SUBLIMINAL VERSES), "Duality" is, "lyrically, what you might think... we've been through a lot as a band and the lyrics really reflect our maintaining faith and the perseverance of all 9 of us," says Joey Jordison (#1). "Duality" represents the album well in its unwillingness to compromise the band’s rock foundation and its ability to be aurally appealing and melodic at the same time. Other songs of note on the record, "Before I Forget" and "Vermillion" underline the statement made by "Duality", with their dark melodies and fierce instrumentation. "Before I Forget" is about rising above the bull*#!t and being a person, not a human. It's about saying what you mean and meaning what you say - taking zero bull#!*t." adds Taylor, "and Vermillion is a stalker's love song, shot thru his eyes. It's kind of a does he or doesn't he type thing - it's left open for you to decide."

If it's sometimes a chore to get past Slipknot's stratified shock-rock shtick, Iowa's nouveau metal-mongers take the occasion of their third album proper to prove there's a genuinely restless, undeniable musical juggernaut beneath the horror-show masquerade. Producer Rick Rubin has honed their modern metal assault to a fine edge here, tempering it with a compelling sense of dynamics missing from all too many similar heavy forgings in the bargain. But credit the band with hammering together the solid foundations of what stands as their best album to date, a collection that succeeds by--surprise--reverting to more traditional song-forms and occasionally operating at something other than a relentless fevered pitch. Call it mainstreaming or a newfound maturity; whatever it is, it pays diverse dividends from the opening cinematic tension of "Prelude 3.0" and paramilitary-cadenced thrill ride "Three Nil" to the moody, rap-thrash single "Duality" and the unlikely, angst-laden pop hooks of "Circle." If that song's cello-inflected atmospherics and lilting Corey Taylor vocals may have the band's faithful initially rubbing their ears in puzzlement, by the time the evocative acoustic guitars, bittersweet harmonies and string quartet break of "Vermilion Pt. 2" rolls around, it's clear this is a band who's challenged itself with broad new horizons--and triumphed. --Jerry McCulley

only $2.47
Not Available
View Add to Cart

The Best of Chuck Brown