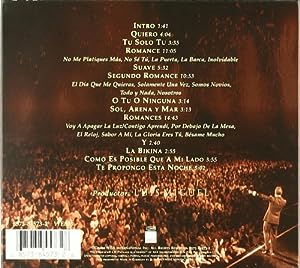 $9.06
As of 2022-10-01 05:38:02 UTC (more info)
Not Available - stock arriving soon
Buy Now from Amazon
Product prices and availability are accurate as of 2022-10-01 05:38:02 UTC and are subject to change. Any price and availability information displayed on http://www.amazon.com/ at the time of purchase will apply to the purchase of this product.
See All Product Reviews

Vivo contains 12 tracks recorded live during his 1999-2000 World Tour. Included in these tracks, are 2 never-before released rancheras: "Y" and "La Bikina", which is the first radio single to be serviced nationally. Also featured are some of Luis Miguel's best interpretations of classic hits like "El Dia Que Me Quieras", "Contigo Aprendi", "Nosotros", "Somos Novios" and many more. Each of these classic tracks are featured in beautifully arranged medleys categorized by Romance, Segundo Romance and Romances. Produced by Luis Miguel, Vivo contains over 70 minutes of music. The CD packaging contains a 6-panel/4 color digipack with sleeve pocket and foil stamp on the front cover. With a collection of Luis Miguel's most popular songs, two classic rancheras performed by Luis Miguel for the first time and attractive artwork, Vivo is set to become one of this year's most-awaited releases and an amazing collection for all Luis Miguel fans around the world.

Certified Latin Platinum by the RIAA. (2/01)

Latin crooner-dreamboat Luis Miguel reached a creative impasse on his last studio album, 1999's Amarte Es un Placer, which simply recycled the same swooning sounds and themes of his previous collections. Vivo, Miguel's latest live recording, includes five songs from that mediocre album, but Miguel manages to inject them with a surprising vitality. He shines on the medleys, which feature 17 songs from Miguel's three albums of smoldering love songs. Even the most canned studio recordings ("Como Es Posible a Mi Lado," "Quiero") come alive onstage, thanks to Miguel's wonderfully rich and expressive voice. Vivo also includes two previously unavailable tracks, "Y" and "La Bikina." Miguel brings a passionate energy to both mariachi classics. The album's biggest testament to "Mickey's" talent, however, is his fans, who scream, sing, and swoon from beginning to end. --Joey Guerra

only $5.55
Not Available
View Add to Cart