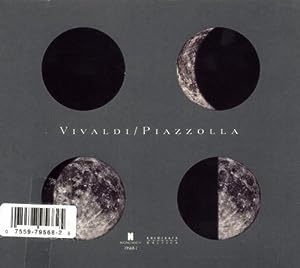 $8.38
As of 2020-09-18 02:16:53 UTC (more info)
Not Available - stock arriving soon
Buy Now from Amazon
Product prices and availability are accurate as of 2020-09-18 02:16:53 UTC and are subject to change. Any price and availability information displayed on http://www.amazon.com/ at the time of purchase will apply to the purchase of this product.
See All Product Reviews

Although already well-established with audiences and critics throughout the world, violinist Gidon Kremer has achieved a new level of global recognition with his recordings of the music of Astor Piazzolla. His remarkable affinity for the composer is brought to a striking new project that pairs the Argentinian composer's "Four Seasons" with the Vivaldi work of the same name: perhaps the best-known piece of classical music there is.

Despite global warming, Vivaldi's The Four Seasons is more popular than ever. But it still seems strange that Gidon Kremer and his Kremerata Baltica ensemble--a group that continues to stun us with riveting performances of lesser-heard works--would tackle the tried-and-true baroque masterpiece. Luckily, Kremer inventively separates each Vivaldi season with a corresponding composition from Astor Piazzolla's Four Seasons Suite, making for fascinating comparisons. Kremer's performances of the Vivaldi are remarkable, sounding solid and fresh. And like an infectious Broadway musical, Piazzolla's seasons always seem on the verge of a giddy dance number. Kremer really gets to show off on these tango-inspired pieces, but he's charming throughout. The programming probably won't make this your reference Four Seasons, but for those who love their Vivaldi in small doses or fans of Kremer's Tango Ballet disc, this is a must-have. --Jason Verlinde