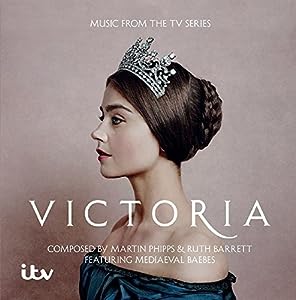 $11.98
As of 2021-02-28 01:59:01 UTC (more info)
Not Available - stock arriving soon
Buy Now from Amazon
Product prices and availability are accurate as of 2021-02-28 01:59:01 UTC and are subject to change. Any price and availability information displayed on http://www.amazon.com/ at the time of purchase will apply to the purchase of this product.
See All Product Reviews

The soundtrack to the hugely successful period drama, following the early life of Queen Victoria. The monarch's life is chronicled as the story begins with the death of King William IV in 1837, her accession to the throne at the tender age of 18 and her relationships with the influential forces around her. With the advice of the prime minister Lord Melbourne and the support of her husband Prince Albert the young queen flourishes and establishes herself in her newfound role.

The soundtrack was composed by Martin Phipps and Ruth Barrett and performed by the Chamber Orchestra of London. The soundtrack also features the instantly recognizable and Emmy nominated theme tune, performed by Mediaeval Baebes.