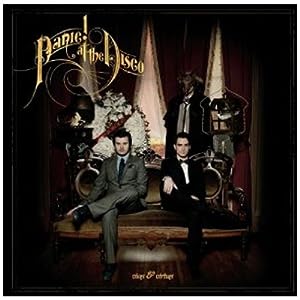 $7.28
As of 2022-11-15 15:10:27 UTC (more info)
Not Available - stock arriving soon
Buy Now from Amazon
Product prices and availability are accurate as of 2022-11-15 15:10:27 UTC and are subject to change. Any price and availability information displayed on http://www.amazon.com/ at the time of purchase will apply to the purchase of this product.
See All Product Reviews

Panic! At The Disco, the platinum-selling and Grammy-nominated group from Las Vegas, NV, is back and in better shape than ever with their hugely anticipated third studio album, Vices & Virtues. Two members lighter, the group is looking to stave off rumors of their disbanding by showing the world they are very much in the picture, and ready to take the world on once again. Based on the energy and response from their sold-out album preview show in New York, it seems Panic! is going to do just that.

Vices & Virtues pushes the classing Panic! sound the new heights, capturing the glory of A Fever You Can't Sweat Out all the while securing their spot with a new generation of fans.

The album is heralded by the first single, "The Ballad Of Mona Lisa", available February 1, 2011 at digital retailers. The music video for which was recently shot in Los Angeles with director Shane Drake, will debut on MTV Networks Tuesday, February 8, 2011. The video teaser for the single has generated much buzz online among fans. Panic! have recently been featured by The New York Times, AtlPress.com, SPIN.com, Billboard.com, MTV News, MTV.com, and AOL Music.

PANIC AT THE DISCO VICES & VIRTUES

On Your Own Love Again

Take It On Faith