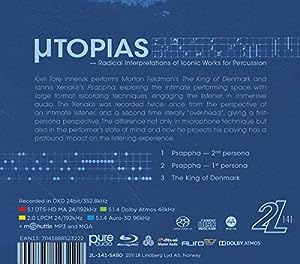 On this album Kjell Tore Innervik performs Morton Feldman's 'The King of Denmark' and Iannis Xenakis' 'Psappha', exploring the intimate performing space with large format recording techniques, engaging the listener in immersive audio. The Xenakis was recorded twice: once from the perspective of an intimate listener, and a second time literally 'over-head', giving a first-persona perspective. The difference not only in microphone technique but also in the performer's state of mind and how he projects his playing has a profound impact on the listening experience. Radical Interpretations of Iconic Musical Works for Percussion (2013-2017) was an interdisciplinary artistic research project hosted at the Norwegian Academy of Music in collaboration with the Oslo Academy of the Arts, the Oslo School of Architecture and Design, Westerdals Oslo ACT and 2L through the Norwegian Artistic Research Programme. A utopia, a non-existent place, is a projection where there are no constraints of practicality, nothing to hold you back. Such is the approach to the music on this album - in each piece of music, using all the resources at their disposal, the recording engineers unite the composer, performer, recording artist and listener, and take them at least some of the way to a utopia.

A Hybrid SACD is included in the box.

only $5.67
Not Available
View Add to Cart

Paderewski: Piano Concerto in A Minor / ...