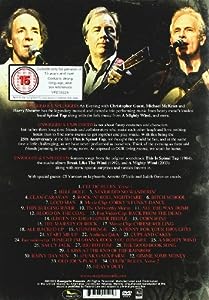 $15.98
As of 2022-06-06 02:49:27 UTC (more info)
Not Available - stock arriving soon
Buy Now from Amazon
Product prices and availability are accurate as of 2022-06-06 02:49:27 UTC and are subject to change. Any price and availability information displayed on http://www.amazon.com/ at the time of purchase will apply to the purchase of this product.
See All Product Reviews

UNWIGGED & UNPLUGGED: An Evening with Christopher Guest,Michael McKean and Harry Shearer has the legendary musical and comedic trio performing music from heavy metal's loudest band Spinal Tap along with the folk music from A Mighty Wind, and more. The UNWIGGED & UNPLUGGED DVD features two plus hours of songs from the original soundtrack This Is Spinal Tap (1984), the studio album Break Like The Wind (1992), and A Mighty Wind (2003) along with some special surprises and rarities thrown in. UNWIGGED & UNPLUGGED is not about funny costumes and characters, but rather three long time friends and collaborators who make each other laugh and love nothing better than to find some excuse to get together and play music. The trio commented, "With this being the 25th Anniversary of the film This is Spinal Tap, we thought this would be a fun and at the same time, a little challenging, as we have never performed as ourselves. Think of the evening as three old friends jamming in your living room. As opposed to OUR living rooms; we won't be home."

If you've been dying to hear acoustic versions of such timeless Spinal Tap classics as "Big Bottom," "Bitch School," and "Sex Farm"--and let's face it, what serious music fan hasn't?--then you've come to the right place, as Unwigged and Unplugged offers that and more. With the 25th anniversary of This Is Spinal Tap at hand in 2009, principals Christopher Guest, Michael McKean, and Harry Shearer decided to hit the road as themselves, performing material they wrote for both that film and A Mighty Wind, the Guest-directed folk music spoof, as well as assorted other odds and ends. With Guest and McKean on guitars, Shearer playing bass, and all three singing (a keyboardist joins in on several tunes, as do singers Judith Owen and Annette O'Toole, wives of Shearer and McKean, respectively), this is Tap and the Kingston Trio-esque Folksmen sans frills, other than a few film clips and the occasional audience participation number. That means the music must stand on its own, and it does so admirably, not to mention hilariously. The Spinal Tap numbers are all the more ridiculous in the acoustic format ("Big Bottom" is delivered like a swingin' hipster finger-snapper, while "Stonehenge" is accompanied by a filmed version of the infamous miniature monument from the original movie). But it's the material from A Mighty Wind that really stands out. Like all great satire (as opposed to broad parody), tunes like "Never Did No Wandering," "Blood on the Coal," and "Old Joe's Place" deftly straddle the line between earnest and absurd; the same is true of the songs written for the Thamesmen, Spinal Tap's psychedelic '60s incarnation, especially "Rainy Day Sun" and "Gimme Some Money," which brilliantly invoke British Invasion bands like the Kinks and the Animals. Add to that a Folksmen cover of the Rolling Stones' "Start Me Up," with the Milwaukee audience heartily joining in on the lewd "You make a dead man ----" chorus, and really, who could ask for more? --Sam Graham

It Could Be a Law

The Button Down Mind Of Bob hart