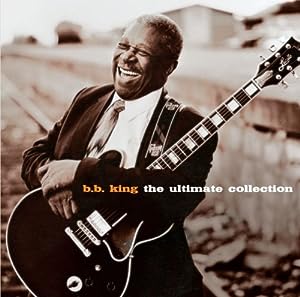 $14.85
As of 2022-11-30 08:06:58 UTC (more info)
Not Available - stock arriving soon
Buy Now from Amazon
Product prices and availability are accurate as of 2022-11-30 08:06:58 UTC and are subject to change. Any price and availability information displayed on http://www.amazon.com/ at the time of purchase will apply to the purchase of this product.
See All Product Reviews

The King Of The Blues celebrates his 80th Birthday later this year, and Universal kicks off a year long celebration with the most complete single disc B.B. King collection ever. The Ultimate Collection collects B.B.'s legendary hits and signature songs between 1951 and 2000, from his first hit, 'Three O'Clock Blues' to his recordings with Eric Clapton and U2. MCA. 2005.

B.B. King's music has been anthologized and put in box sets many times, but this is the first single-disc collection that truly spans the American icon's career. It starts with his breakthrough 1951 No. 1 R&B hit "Three O'Clock Blues" and ends, chronologically, with 2000's "Ten Long Years" from his platinum-selling, pop-chart-topping smash collaboration with Eric Clapton, Riding with the King. In between there are 19 numbers that trace King's creative peaks (1969's "The Thrill is Gone," 1960's "Rock Me Baby") and valleys (1973's disco-inspired "I Like to Live the Love"). And they all tell the story of his growth as a performer. As the years and tunes tumble by, King's guitar solos become more expansive and adventurous, and his cross-genre experiments, like 1987's "When Love Come to Town" with U2, grow bolder. "I'll Survive," also featured here, has become King's late-career theme song, but as he heads toward his 80th birthday on September 16, 2005--still playing 150 concerts a year with his vastly influential guitar skills sharp and his voice just a bit weathered--King's version of survival contains genuine majesty. --Ted Drozdowski