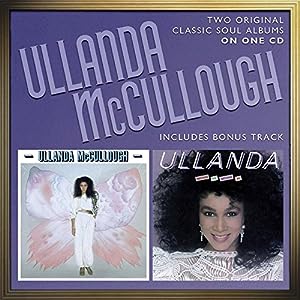 $15.57
As of 2021-04-19 15:25:54 UTC (more info)
Not Available - stock arriving soon
Buy Now from Amazon
Product prices and availability are accurate as of 2021-04-19 15:25:54 UTC and are subject to change. Any price and availability information displayed on http://www.amazon.com/ at the time of purchase will apply to the purchase of this product.
See All Product Reviews

One of the most respected and active session singers of the mid- 70s and early 80s, Ullanda McCullough s distinctive voice could be heard on numerous popular jingles (including 1971 s Coca-Cola campaign, I d Like To Teach The World To Sing ) as well as albums by Eddie Floyd, Blood, Sweat & Tears, Patti Austin, Cissy Houston, Bionic Boogie, Carly Simon, Chic, Roberta Flack, Diana Ross, the soundtrack for the movie The Wiz and Ashford & Simpson, with whom she toured as a primary background vocalist during the late 70s. In 1979, Ullanda recorded her first solo album (Love Zone) for Ocean/Ariola Records before signing with Atlantic Records where she recorded two albums, a 1981 self-titled set and 1982 s Watching You, Watching Me. Real Gone Music in association with SoulMusic Records is proud to present the worldwide CD debut of these two rare LPs, together on a two-on-one CD.
Ullanda McCullough was written and produced in its entirety by Nick Ashford & Valerie Simpson and includes the cut Warm And Gentle Explosion, which became a popular rare groove track in the UK in the 90s along with other gems penned by the famed pair such as Bad Company (with a single edit included here as a bonus track), Rumors, It s You and You re Gonna Wanna Come Back. Key musicians included Simpson on piano, guitarist Eric Gale, drummer Yogi Horton, keyboardist Philip Woo and percussionist Ralph MacDonald.
Watching You, Watching Me was produced by renowned arranger/conductor and producer Bert DeCoteaux and featured an all-star cast of famed players (such as keyboardist Ray Chew, bassists Marcus Miller, Tinker Barfield and Wayne Brathwaite and percussionist Sammy Figueroa) and the cream of New York s session singers, including Luther Vandross who did the background vocal arrangements for four of the album s eight tracks Tawatha Agee (of the band Mtume) and Brenda White, who would go on to sing on albums by Vandross and tour with Aretha Franklin. Standout tracks include Men Kiss And Tell, (originally recorded by Carrie Lucas), Ullanda s own What s It All About and William Eaton s compelling title track, covered in 1985 by Bill Withers. Liner notes are by SoulMusic Records founder David Nathan.