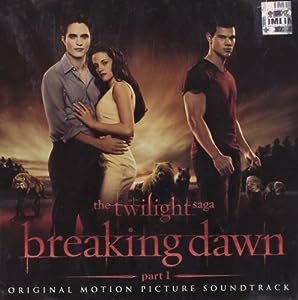 $10.17
As of 2022-06-23 02:06:39 UTC (more info)
Not Available - stock arriving soon
Buy Now from Amazon
Product prices and availability are accurate as of 2022-06-23 02:06:39 UTC and are subject to change. Any price and availability information displayed on http://www.amazon.com/ at the time of purchase will apply to the purchase of this product.
See All Product Reviews

Summit Entertainment, Chop Shop Records and Atlantic Records have announced the complete tracklisting for The Twilight Saga: Breaking Dawn - Part 1 Original Motion Picture Soundtrack, the musical companion to the highly anticipated fourth installment in Summit's worldwide blockbuster film franchise. The soundtrack is highlighted by the new single, "It Will Rain," by Grammy Award-winning, multi-platinum singer/songwriter/producer Bruno Mars. The album arrives in stores and at all online retailers on Tuesday, November 8th, while the film release of The Twilight Saga: Breaking Dawn - Part 1 opens in theatres nationwide on November 18th.

The Hobbit: The Desolation of Smaug: Ori...

only $2.95
Not Available
View Add to Cart

Natasha, Pierre and the Great Comet of 1...