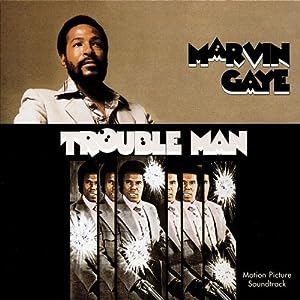 $7.96
As of 2021-04-17 00:56:12 UTC (more info)
Not Available - stock arriving soon
Buy Now from Amazon
Product prices and availability are accurate as of 2021-04-17 00:56:12 UTC and are subject to change. Any price and availability information displayed on http://www.amazon.com/ at the time of purchase will apply to the purchase of this product.
See All Product Reviews

Two phenomenons of early-'70s soul--Marvin Gaye and the soundtracks of blaxploitation flicks--met on this 1972 souvenir of the violent Robert Hooks vehicle. Unlike Curtis Mayfield's concurrent Superfly, however, Gaye's record mostly fails to rise above the clichés of film music. Save for the pained, dramatic title single and a few moments of sax-and-wah-wah strutting, much of what's here fails to touch Mayfield's song suite. That's ironic, given that Gaye bookended Trouble Man with two conceptual triumphs, What's Going On and Let's Get It On. His fans, and students of the genre, won't find this a total disappointment, but with "Trouble Man" itself available on a number of best-of CDs, it's inessential. --Rickey Wright