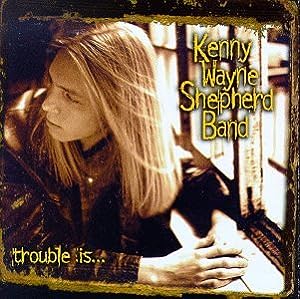 $12.98
As of 2023-01-24 13:56:22 UTC (more info)
Not Available - stock arriving soon
Buy Now from Amazon
Product prices and availability are accurate as of 2023-01-24 13:56:22 UTC and are subject to change. Any price and availability information displayed on http://www.amazon.com/ at the time of purchase will apply to the purchase of this product.
See All Product Reviews

Kenny Wayne Shephard's has established himself as an immediate sensation-the most gifted young guitarist to arrive in years. His much-anticipated second album, Trouble Is..., is an astonishingly, powerful follow-up that proves him to be an artist with a boundless future ahead of him. A stinging set of electric blues played with passionate conviction, Trouble Is... should dramatically expand his already-huge fan base.

It's not hard to understand the appeal of Kenny Wayne Shepherd, currently being hailed as the heir to Stevie Ray Vaughan. He's young (an increasing rarity in blues and blues-related genres), he writes catchy songs, and his "Blue on Black" is widely played on rock radio. Trouble Is . . . is an enjoyable listen, from rockers like "Slow Ride" and "Chase the Rainbow," to swingy mid-tempo songs like "True Lies" and "(Long) Gone," to slower almost-ballads such as "Nothing to Do with Love" and the all-pervasive "Blue on Black". Expect to start hearing "I Found Love (When I Found You)" at high school proms and homecoming dances. It remains to be seen how Shepherd will develop, but he's among the most promising young guitarists out there today. -- Genevieve Williams