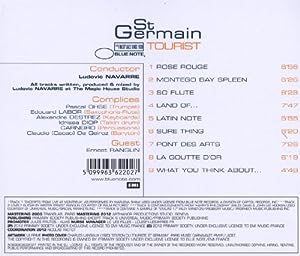 $5.78
As of 2021-06-19 00:54:42 UTC (more info)
Not Available - stock arriving soon
Buy Now from Amazon
Product prices and availability are accurate as of 2021-06-19 00:54:42 UTC and are subject to change. Any price and availability information displayed on http://www.amazon.com/ at the time of purchase will apply to the purchase of this product.
See All Product Reviews

In his four-star Rolling Stone review of the album, David Fricke praised St Germain's skilled electronic-meets-jazz approach: A sly dog with a disciple's touch, Navarre shows respect for the spirit, if not the letter, of classic jazz. He gives his live soloists, including trumpeter Pascal Ohse and saxophonist-flutist Edouard Labor, room to breathe, if not blow wild. Rolling Stone later touted Tourist as one of 2000's best albums.

In December 1995, St Germain became the first electro wave artist to perform onstage with musicians (at the Les Transmusicales in Rennes, France), and he has headlined more than 280 shows around the world. Tourist's release was supported with a sold out international tour which included concerts in France, North America, Italy, the Netherlands, Germany, Belgium, Israel, Spain, Portugal, the UK, New Zealand, Australia, Switzerland, Greece, Turkey, Norway, Denmark, Finland, and China.