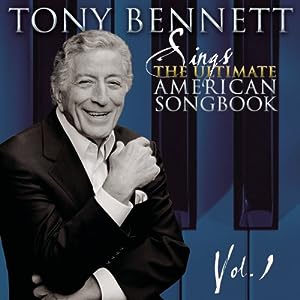 $2.27
Not Available - stock arriving soon
Buy Now from Amazon
Product prices and availability are accurate as of and are subject to change. Any price and availability information displayed on at the time of purchase will apply to the purchase of this product.
See All Product Reviews

During the 20th century, American songwriters produced songs that became the standard for vocalists around the world. While many have recorded versions of these songs over the years, Tony Bennett is in that rare class of artist who actually took part in their original interpretation. Tony Bennett Sings The

songs from this large body of work.

At the end of the 20s, into the 30s and 40s, there was a revolution in popular music that will never be topped. Like a renaissance period that was pure magic, it will become our classical music, and it turns out to be The Great American Songbook. Tony Bennett

The predictably classy Tony Bennett Sings the Ultimate American Songbook, Vol. 1 might trip you up if you're not an on-the-ball kind of fan: Unlike 2006's Duets: An American Classic and other recent Bennett projects that reached into the past for material but showcased his still mighty modern vocal prowess, Ultimate pulls from real-life days gone by; these are performances hand-plucked by the artist from the '50s, '60s, and '90s. As such, they're apt to add up to a long walk down memory lane for some and a refresher course on why the man matters for others (time has been kind to Bennett, but his gifts were evident decades before he became eligible for Social Security, they'll find). For both camps, the music will sound reliably sophisticated and flecked with magic. Highlights include Cole Porter's haunting "Ev'ry Time We Say Goodbye," from 1958, and the spunky "Ain't Misbehavin,'" from Hot Chocolate, recorded in 1964. But the title can't be counted out when it comes to reeling off the best bits: "Vol. 1" indicates a volume two is on the way, after all. --Tammy La Gorce