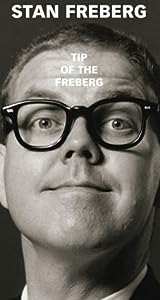 $175.97
As of 2021-10-02 03:43:13 UTC (more info)
Not Available - stock arriving soon
Buy Now from Amazon
Product prices and availability are accurate as of 2021-10-02 03:43:13 UTC and are subject to change. Any price and availability information displayed on http://www.amazon.com/ at the time of purchase will apply to the purchase of this product.
See All Product Reviews

Tip of the Freberg: The Stan Freberg Collection 1951-1998 is a massive four-CD set, not only including oodles of material from all facets of Stan Freberg's recorded work (largely from the '50s and '60s, although it goes all the way up to the late '90s), but there's also a 20-minute video with his humorous television commercials. The first disc is devoted to his musical parodies from the '50s, and on both an entertainment and significance level, it's the best of the four. Besides his debut hit "John & Marsha," there are fairly funny and expertly produced, if sometimes mean-spirited, spoofs of Mitch Miller, Les Paul, the Platters, "Rock Island Line," Harry Belafonte, Lawrence Welk, and most famously Elvis Presley's "Heartbreak Hotel," with its out-of-control echo chambers; there are even a couple of previously unissued 1953 takeoffs on popular TV hosts. The satire of rock & roll crosses the line to animosity sometimes, most infamously on "The Old Payola Roll Blues." Disc two gets more into satire of media stars and programs, including some of his radio shows and his controversial (to Capitol Records, anyway) take on Joseph McCarthy, "Point of Order." Disc three is mostly devoted to material from both volumes of his United States of America history, and also has his 1959 EP "Omaha!," a composition that was also an extended-length commercial. Disc four wraps up with no less than 57 of his radio commercials, all previously unreleased. Of course, you'd have to be kind of nuts to listen to all or much of this at once. It's funny, to varying degrees, and kind of a link between Mad magazine and Monty Python, but much closer to Mad. The commercials in particular might have more value as cultural artifacts than as classics of recorded comedy.

Tip of the Freberg presents four CDs and one VHS-format videotape of classic comedy from the legendary master who paved the way for Saturday Night Live and National Lampoon. This is the definitive collection of the sarcastic but sophisticated Freberg magic, including the best of his famous routines and satirical songs plus unreleased goodies new and old. The set also contains the first-ever CD of his hilarious radio ads and the video has award-winning TV commercials that he wrote and directed. The snappy package comes complete with an actual X-ray of Freberg's skull and it is lovingly annotated with details of who played the music (exotica big kahuna Les Baxter wrote some of the band arrangements), what Freberg's writing and working methods were, and who supplied the characters' voices. (Not surprisingly Freberg did many of the vocal parts himself--he's a capable singer and actor.) The older material remains funny stuff, and the liner notes provide the depth of historical context. This is not a box set that will be played once and then put on the shelf. Everything on Tip of the Freberg is good for repeat plays and hours of laughs in the years ahead. --John Sulak

Dylan Thomas Reads His Own Poetry

only $6.65
Not Available
View Add to Cart

The Best of Sha Na Na