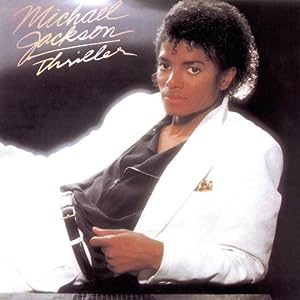 $4.99
As of 2023-02-02 01:19:29 UTC (more info)
Not Available - stock arriving soon
Buy Now from Amazon
Product prices and availability are accurate as of 2023-02-02 01:19:29 UTC and are subject to change. Any price and availability information displayed on http://www.amazon.com/ at the time of purchase will apply to the purchase of this product.
See All Product Reviews

Description of Thriller by Sony

We are delighted to stock the fantastic Thriller.

With so many on offer right now, it is wise to have a brand you can trust. The Thriller is certainly that and will be a superb buy.

For this reduced price, the Thriller comes widely recommended and is always a regular choice with lots of people. Sony have included some great touches and this means great value.

What can we say? Here's the best-selling album of all time-including the Top 10s Beat It; Billie Jean; The Girl Is Mine (with Paul McCartney); Wanna Be Startin' Somethin'; Human Nature; Thriller , and P.Y.T. (Pretty Young Thing) -plus (CD only) unreleased songs, demos, interviews and more!

Where Off the Wall was pretty much straight good times, Thriller introduced dread into Michael Jackson's solo work. By 1995's HIStory, this element curdled into overwhelming self-regard and out-of-touchness, but here it's bracing. While Thriller offers its share of cute ("The Girl Is Mine," a duet with Paul McCartney that was the album's first single; "P.Y.T."), the most memorable cuts remain "Billie Jean," "Beat It," and "Wanna Be Startin' Somethin'," all of which meld musical imagination and worried-mind lyrics.

There's also the title track, which takes a cue from Parliament's concept pieces in employing Vincent Price to warn that nonfunky forces will "terrorize y'all's neighborhood." Thriller, of course, continues to battle with the Eagles' first greatest-hits package for the title of biggest-selling U.S. long-player ever. Bonus material on this edition includes "Someone in the Dark," from Jackson's E.T. children's album, and a Quincy Jones interview in which the producer cites "My Sharona" as the inspiration for "Beat It"--and, even better, the real-life Billie Jean's claim that Michael was "the father of one of her twins." --Rickey Wright