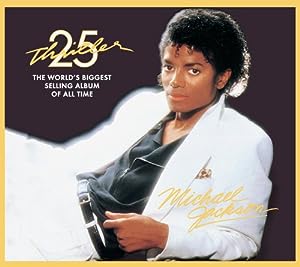 $10.40
As of 2021-07-12 14:16:17 UTC (more info)
Not Available - stock arriving soon
Buy Now from Amazon
Product prices and availability are accurate as of 2021-07-12 14:16:17 UTC and are subject to change. Any price and availability information displayed on http://www.amazon.com/ at the time of purchase will apply to the purchase of this product.
See All Product Reviews

The best-selling album of all time is 25, and this birthday edition puts new jewels atop the crowning achievement of the King of Pop. Billie Jean; Beat It; Human Nature; P.Y.T.; The Girl Is Mine (with Paul McCartney) and the rest join eight bonus tracks (an unissued song from the Thriller sessions; a Billie Jean demo; remixes by Kanye West, Akon, will.i.am and more) plus a DVD of videos and Michael's famous moon-walkin' moment on the Motown 25 TV special. Go for the deluxe version and get a 48-page book and suitably dressed-up packaging!

Should several of the tracks on the 25th anniversary edition of Thriller find their way onto your MP3 player, you're going to have to admit: the music holds up. "Beat It" is not about to go stale, at least not without a rumble, and neither are "Billie Jean" and "P.Y.T." Even if you put the record-hurtling hits aside, you're still left with the realization that without MJ, there might not have been a JT [Justin Timberlake], never mind a Ne-Yo (listen closely to "Human Nature" and "Wanna Be Startin' Somethin'"). The bonus DVD bundled with the expanded CD includes a digitally redone version of the famous title-track video, among other clips, and it still astonishes with its choreography and attitude. As for the new tracks--Fergie inserts herself into "Beat It," Will.i.am takes on "The Girl Is Mine" and "P.Y.T.," Kanye West remixes "Billie Jean" (with characteristically subtle brilliance), Akon duets with M-Jack on "Wanna Be Startin' Somethin'," and the unreleased ballad "For All Time" (from the original Thriller sessions) is shined up and tacked on--they will suck you in like it was pop music's hugest year, 1983, all over again. Start brushing up on your moonwalk now. --Tammy La Gorce