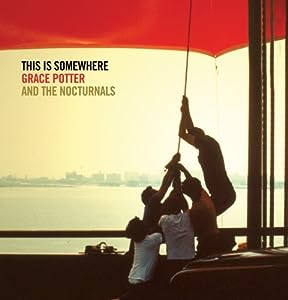 $29.95
As of 2023-02-02 01:28:51 UTC (more info)
Not Available - stock arriving soon
Buy Now from Amazon
Product prices and availability are accurate as of 2023-02-02 01:28:51 UTC and are subject to change. Any price and availability information displayed on http://www.amazon.com/ at the time of purchase will apply to the purchase of this product.
See All Product Reviews

The pride of Vermont, Boston Music Award and Jammie winners Grace Potter and the Nocturals return with their first full-fledged Hollywood Records album This Is Somewhere. Renowned for their fervent and substantial nationwide touring base, GP&TN wowed the crowds at Bonaroo in 2006, and at the 2007 SxSW convention. 2007 has already brought #1 Most Added status at AAA (the already charting first single is Ah Mary ), key TV exposure on Grey's Anatomy and American Idol, an ecstatically received, high profile appearance at SxSW and more touring. High profile dates include headlining venues as large as 4,000 seats, plus select co-headlining and special guest appearances. Upcoming highlights include already confirmed appearances street-week on The Tonight Show with Jay Leno and Craig Ferguson's Late, Late Show. Check out www.gracepotter.com for the latest updates.

What distinguishes Vermont's Grace Potter from the recent run of the female singer-songwriter mill is her affinity for anthems and a powerhouse band that can deliver the goods. Though quieter fare such as "You May See Me" and "Lose Some Time" finds one foot in folk music, her heart is plainly with hard-charging rockers such as the opening "Ah Mary," the melodic propulsion of "Ain't No Time," and the supercharged kick of "Mastermind." Ballads such as "Apologies" and "Falling or Flying" show her soulful side, while the sexually assertive road song "Stop the Bus" provides further indication of her range. The closing "Big White Gate" sounds like a gospel cousin of John Prine's "Angel from Montgomery." --Don McLeese

Will the Circle Be Unbroken (30th Annive...

Rufus Does Judy At Carnegie Hall