The Wedding Singer: Music From The Motion Picture by Various Artists (1998) - Soundtrack 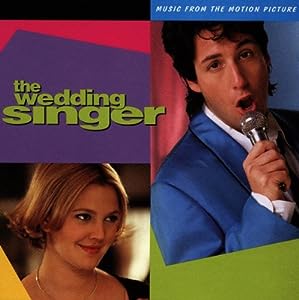 The Wedding Singer: Music From The Motion Picture by Various Artists (1998) - Soundtrack

$20.79
As of 2021-07-19 00:09:08 UTC (more info)
Not Available - stock arriving soon
Buy Now from Amazon
Product prices and availability are accurate as of 2021-07-19 00:09:08 UTC and are subject to change. Any price and availability information displayed on http://www.amazon.com/ at the time of purchase will apply to the purchase of this product.
See All Product Reviews

Adam Sandler's latest film project is the new comedy The Wedding Singer, which opens nationwide on February 13. Set in 1985, the film stars Sandler as a suburban wedding crooner who guarantees all a good time. In keeping with the 80's setting of the film, this soundtrack album features more than a dozen classic tunes from the decade of big shoulder pads.

Sounding like a flashback of the first few years of MTV, the soundtrack of The Wedding Singer starts as an intended goof and ends up quite listenable, thanks. While a couple of these songs (Musical Youth's "Pass the Dutchie" in particular) had already fallen off the cultural radar by 1985, when the movie's action takes place, what's most impressive is the staying power most of them hold. If anything, the Psychedelic Furs' "Love My Way" sounds even better than it did then, and of course "How Soon Is Now," and "Blue Monday" are classics that have transcended their era: Just ask Matt Pinfield. Or Adam Sandler. Or Steven Morrissey. --Rickey Wright

THE WEDDING SINGER: MUSIC FROM THE MUSIC

Where the Pyramid Meets the Eye: A Tribu...