The Very Best Of Arvo Part 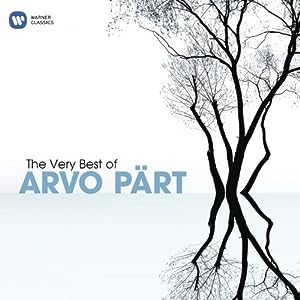 The Very Best Of Arvo Part

$9.72
As of 2021-04-23 05:35:42 UTC (more info)
Not Available - stock arriving soon
Buy Now from Amazon
Product prices and availability are accurate as of 2021-04-23 05:35:42 UTC and are subject to change. Any price and availability information displayed on http://www.amazon.com/ at the time of purchase will apply to the purchase of this product.
See All Product Reviews

Released to celebrate Arvo Pärt's 75th birthday in September 2010, this 2-CD commemorative set contains many of his best-known works including many composed in Pärt's new style, the most notable of which is Spiegel im Spiegel and Cantus in memoriam Benjamin Britten. Along with Gorecki, Arvo Pärt is the best-selling living composer of the last 20 years.

Once a member of the avant-garde, the Estonian composer Arvo Pärt has for over 40 years been a leading composer in the 'New spirituality' style. His musical fingerprints are well-loved an unmistakable. spare harmonies, simple phrases and gentle, tender expression in search of peace in a busy world. This collection brings together many of his best-known choral and instrumental works.

Pärt was born in Estonia at a time when the country was experiencing a short period of independence from its more powerful neighbours. In 1944, however, Estonia was occupied by the Soviet Union and, as a result, Pärt spent the greater part of his life struggling against the Soviet régime. In 1980 he and his family emigrated to Austria, where he took up Austrian citizenship; they returned to Estonia at the beginning of the new century and now live in the capital, Tallinn.

Pärt's early works were influenced by Prokofiev and Shostakovich but the introduction of serialism into his music brought him into conflict with the authorities, who banned many of his earliest works.

This affected him deeply and resulted in a period of silent introspection during which time he took a great interest in early music. It was during the 1970s that Pärt developed the "Tintinnabuli Style" of music for which he has become most famous - and which has resonated with millions of listeners and consumers. This style of composition has been likened to minimalism and there are distinct similarities in the use of slow tempi and repeated notation.