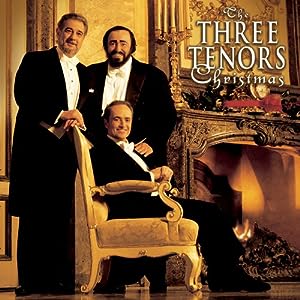 $3.81
As of 2021-07-16 13:52:35 UTC (more info)
Not Available - stock arriving soon
Buy Now from Amazon
Product prices and availability are accurate as of 2021-07-16 13:52:35 UTC and are subject to change. Any price and availability information displayed on http://www.amazon.com/ at the time of purchase will apply to the purchase of this product.
See All Product Reviews

Have yourself a warm, sophisticated Christmas with the Three Tenors as they cradle the classics with their magnificient voices. Cantique de noel (O Holy Night); Ave Maria, Dolce Maria; Oh Tannenbaum; White Christmas, and more.

Resplendent in voice and manner, José Carreras, Placido Domingo, and Luciano Pavarotti deliver 21 songs of traditional sacred music and secular numbers in a remarkable 1999 live recording from the opulent Viennese concert hall (Konzerthaus), with the Vienna Symphony Orchestra and a renowned choir. The Three Tenors are practically as famous as the faces of Mount Rushmore and inspire perhaps even more awe and adulation around the world than the four presidents. The performances--whether alone, in tandem, or simply as the threesome that has made them collectively famous--are generally impeccable for their passion, nuance, and sheer tour de force vocal artistry. Reaching often into the classical realm for such works as the traditional German carol "Susani," Strauss's and Brahms's "Wiegenlied," plus traditional Polish and Spanish pieces, the trio also visits Pavarotti's "Ave Maria, dolce Maria" (cowritten with Vittoriano Benvenuti), and "Un nuevo siglo," written by Domingo's son. Only John Lennon and Yoko Ono's "Happy Christmas/War Is Over" doesn't quite work in this grand setting. --Martin Keller

only $0.81
Not Available
View Add to Cart

only $8.32
Not Available
View Add to Cart