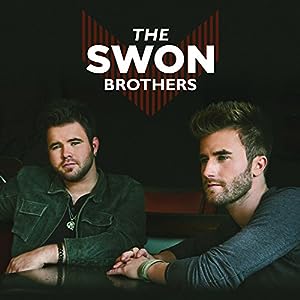 $3.84
As of 2022-09-17 23:54:02 UTC (more info)
Not Available - stock arriving soon
Buy Now from Amazon
Product prices and availability are accurate as of 2022-09-17 23:54:02 UTC and are subject to change. Any price and availability information displayed on http://www.amazon.com/ at the time of purchase will apply to the purchase of this product.
See All Product Reviews

Arista Nashville recording duo The Swon Brothers (Zach and Colton) are hot
on the charts with their first single, "Later On," which is currently in the Top 15 at country radio and climbing! "Later On" launched with the most opening-week radio adds of any debut single in the history of music publication Country Aircheck. The journey marks the beginning of an exciting new chapter in the history of the Swons, who have been performing professionally since childhood. Honored with the Rising Star award by the Oklahoma Music Hall of Fame, the Muskogee, OK, natives first hit the national radar charming fans with their incredible sibling harmonies and fun-loving personalities as finalists on "Team Blake" in Season 4 of NBC's The Voice. The Swons are excited about the release of their forthcoming major-label debut album, helmed by producer Mark Bright (Carrie Underwood, Sara Evans).