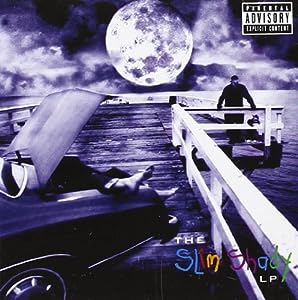 $4.81
As of 2022-06-27 13:27:08 UTC (more info)
Not Available - stock arriving soon
Buy Now from Amazon
Product prices and availability are accurate as of 2022-06-27 13:27:08 UTC and are subject to change. Any price and availability information displayed on http://www.amazon.com/ at the time of purchase will apply to the purchase of this product.
See All Product Reviews

On The Slim Shady LP, Eminem wants it all. He's conflicted, you see; the world has treated him badly, and he wants to respond in kind. But he isn't a straight-up gangsta--this is, after all, the first release on Dr. Dre's Aftermath Records, his post-Death Row-era venture--and Eminem (born Marshall Mathers) doesn't really want anyone to follow in his footsteps, which leads to some interesting contradictions on this album. In the first single, "My Name Is," he's self-deprecating, rapping about his poor upbringing and his hairy palms. But on the very next song, "Guilty Conscience," he plays the devil to Dr. Dre's angel--that is, until Eminem brings up an incident from Dre's devilish past, rapping, "You gonna take advice from someone who slapped Dee Barnes?" Later, on "'97 Bonnie & Clyde," he turns Will Smith's "Just the Two of Us" on its ear, making it a tale of murder; but on "My Fault," he actually feels bad--though whether it's for the girl he overdosed or for himself is tough to figure out. With his nasal Midwestern tone, Mathers has a clean, clear flow, and the production--by Dr. Dre, Marky, and Jeff Bass--is crisp but consistently fun. With his outlook, it's tough to take Eminem too seriously, but he's made an album you don't have to take seriously to enjoy. --Randy Silver

Get Rich or Die Tryin' [Vinyl]

only $3.24
Not Available
View Add to Cart