The Saint: Music From The Motion Picture Soundtrack 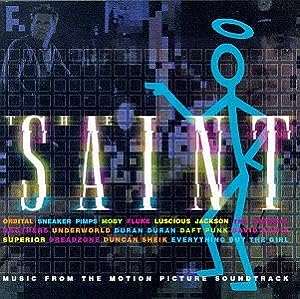 The Saint: Music From The Motion Picture Soundtrack

$15.49
As of 2021-04-05 15:16:15 UTC (more info)
Not Available - stock arriving soon
Buy Now from Amazon
Product prices and availability are accurate as of 2021-04-05 15:16:15 UTC and are subject to change. Any price and availability information displayed on http://www.amazon.com/ at the time of purchase will apply to the purchase of this product.
See All Product Reviews

The Saint ~ The Saint: Music From The Motio

This '90s update of the classic U.K. television series of the '60s was roundly criticized for its murky, convoluted plotting and quirky performance by Val Kilmer in the title role of Simon Templar. But its soundtrack--a typically market-driven collection of modern pop--is actually one of the better efforts of the '90s. Leaning heavily on electronica influences (Orbital's conservative rendering of Edwin Astley's TV theme, Moby's driving "Oil," The Chemical Brothers' "Setting Sun," and others), The Saint at least holds together as a cohesive musical statement, something many similar collections can't claim. Also includes songs by the Sneaker Pimps, Duran Duran, David Bowie, Everything But the Girl, and Duncan Sheik. --Jerry McCulley