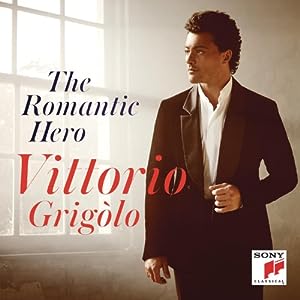 $7.95
As of 2021-07-22 11:24:34 UTC (more info)
Not Available - stock arriving soon
Buy Now from Amazon
Product prices and availability are accurate as of 2021-07-22 11:24:34 UTC and are subject to change. Any price and availability information displayed on http://www.amazon.com/ at the time of purchase will apply to the purchase of this product.
See All Product Reviews

Renowned Tenor Performs the French Arias
That Shaped His Career

Established as one of the world s leading Italian tenors, Vittorio Grigòlo is renowned for his soaring voice, his handsome stage presence and his great success as an opera star, performing with The Metropolitan Opera, Los Angeles Opera, La Scala and more. He s also appeared on hit television shows including Dancing with the Stars and Good Morning America. Throughout his career, an integral part of his operatic success has been in French operas. His extraordinary international breakthrough came in the role of Des Grieux in Massenet s Manon at the Royal Opera House in 2010 where he astounded audiences and critics. The next year found Grigólo performing key French repertoire including the title role in Faust and Roméo et Juliette.
His new album, The Romantic Hero, is Vittorio s first album of all French repertoire and explores the big romantic arias that suit his voice and temperament perfectly. Guest artists on the album include stellar new soprano Sonya Yoncheva on Roméo et Juliette and actress Alessandra Martines reciting the opening lines from Les Contes d Hoffmann aria. Says Vittorio, In this very special album, my first departure into the French repertoire, I wanted to look back on and explore the kind of figure that is the true romantic hero. It s the hero that makes me feel alive on stage. I chose the French hero because each of these arias are special to me and reveal something hidden inside me. Vittorio can be seen through April 18 at The Metropolitan Opera in New York reprising his triumphant role as Rodolfo in La Bohème.

The Best of Bing Crosby - The Christmas ...

Wake Up and Goodnight