The Prince Of Egypt: Music From The Original Motion Picture Soundtrack 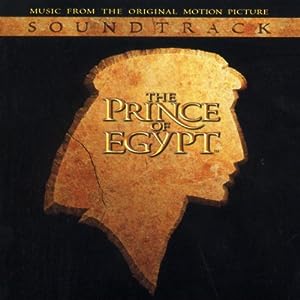 The Prince Of Egypt: Music From The Original Motion Picture Soundtrack

$2.09
As of 2022-11-27 20:19:34 UTC (more info)
Not Available - stock arriving soon
Buy Now from Amazon
Product prices and availability are accurate as of 2022-11-27 20:19:34 UTC and are subject to change. Any price and availability information displayed on http://www.amazon.com/ at the time of purchase will apply to the purchase of this product.
See All Product Reviews

Dreamwork's 1st animated feature, the Prince of Egypt, is an epic drama that tells the story of 2 men - one born a Prince, the other born a slave. This original soundtrack album boasts the highly anticipated duet between superstars Mariah Carey & Whitney Houston, an a capella track by platinum+ superstars Boyz II Men and 6 new songs by Academy Award winning lyricist Stephen Schwartz (Pocahontas). Academy Award-winner Hans Zimmer (The Lion King) composed the score.

It should be little surprise that of the three Prince of Egypt CDs, this one, which contains music actually used in the picture, is the best. The disc features songs written by Academy Award winners Stephen Schwartz and Hans Zimmer. It also showcases the always impressive vocal talents of Ofra Haza on several tracks. The disc also crams in a few singles--ranging from the solid Boyz II Men track "I Will Get There" to the average "The Prince of Egypt (When You Believe)" by Whitney Houston and Mariah Carey to the dismal "Through Heaven's Eyes," by K-Ci & JoJo. But ultimately, Haza steals the show on tracks like "Cry" and the gorgeous "Deliver Us," performed with Eden Riegel. Other standouts include "Playing with the Big Boys," by Steve Martin and Martin Short, and a pleasant, if not unexpected, vocal by Michelle Pfeiffer on "When You Believe." --Aaron Tassano

Look to the Rainbow

Playing for Change 3: Songs Around the W...

only $9.84
Not Available
View Add to Cart