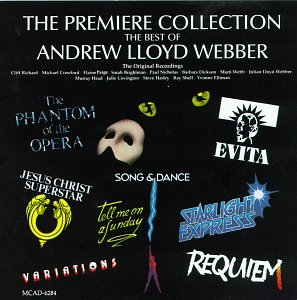 $7.98
As of 2022-12-08 07:42:44 UTC (more info)
Not Available - stock arriving soon
Buy Now from Amazon
Product prices and availability are accurate as of 2022-12-08 07:42:44 UTC and are subject to change. Any price and availability information displayed on http://www.amazon.com/ at the time of purchase will apply to the purchase of this product.
See All Product Reviews

There are many, many Andrew Lloyd Webber albums out there, including cut-and-paste compilations and songbooks from individual artists, most notably Sarah Brightman, Michael Crawford, and even Jose Carreras. The Premiere Collection is probably as authentic as you can get in a hits album, however. In addition to the most popular selections from the original casts of Evita, Cats, and Jesus Christ Superstar, the 57-minute album includes two selections from Tell Me on a Sunday (also recorded by Bernadette Peters as Song and Dance), the title tune from Starlight Express, the "Pie Jesu" from the Requiem, and a snippet from the Paganini Variations, thereby allowing you to hear the good stuff without having to spring for the complete albums. Note that the three selections from Phantom of the Opera are the 1986 pop singles instead of the cast recordings, meaning Steve Harley rather than Crawford sings with Brightman on the title tune and Cliff Richard subs for Steve Barton on "All I Ask of You." (Crawford does sing "The Music of the Night," of course.) This 1989 compilation was too early for Aspects of Love or Sunset Boulevard, and Joseph and the Amazing Technicolor Dreamcoat is ignored, but these omissions are rectified in the follow-up album The Premiere Collection Encore, and the American-slanted version, The Very Best of Andrew Lloyd Webber: The Broadway Collection. --David Horiuchi

only $9.76
Not Available
View Add to Cart