The Phantom of the Opera (2004 Movie Soundtrack) 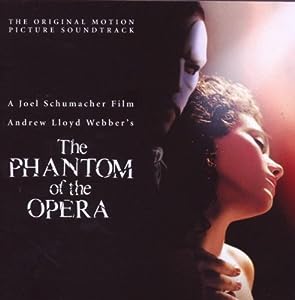 The Phantom of the Opera (2004 Movie Soundtrack)

$17.98
As of 2021-09-20 14:38:24 UTC (more info)
Not Available - stock arriving soon
Buy Now from Amazon
Product prices and availability are accurate as of 2021-09-20 14:38:24 UTC and are subject to change. Any price and availability information displayed on http://www.amazon.com/ at the time of purchase will apply to the purchase of this product.
See All Product Reviews

Soundtrack to the long awaited film adaptation of the blockbuster stage musical.

For better or worse, Andrew Lloyd Webber's adaptation of Gaston Leroux's gothic horror/romance novel has done for stage musicals what Spielberg's Jaws did for fish stories, with worldwide sales of its original cast album approaching 25 million. While director Joel Schumacher's film turns on his typically ambitious visual verve, its new film soundtrack recording has been paradoxically focused in scope, yet beefed up dynamically via the brawny presence of a hundred piece orchestra and The London Boys Choir. This single disc version showcases all of Phantom's key songs (a deluxe, double-disc edition is also available), with Gerard Butler imparting a welcome, youthful sensuality to his Phantom, making a fine foil for Emmy Rossum's ever-conflicted Christine. Original show orchestrator David Cullen has fashioned compelling new contemporary arrangements to frame Webber's songs -- which now conclude with the lilting, upbeat new ballad he wrote for the film, "Learn to Be Lonely," sung by Minnie Driver. --Jerry McCulley

Billy's Back on Broadway

Titanic: Music from the Motion Picture