The Music of John Lewis 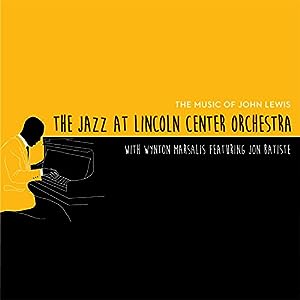 The Music of John Lewis

$11.28
As of 2020-04-02 09:06:07 UTC (more info)
Not Available - stock arriving soon
Buy Now from Amazon
Product prices and availability are accurate as of 2020-04-02 09:06:07 UTC and are subject to change. Any price and availability information displayed on http://www.amazon.com/ at the time of purchase will apply to the purchase of this product.
See All Product Reviews

Few captured the sleek, swinging sophistication of jazz better than pianist, composer, and bandleader John Lewis, who had a long, deep, personal relationship with Jazz at Lincoln Center. “He used to always call our program a miracle,” says Wynton Marsalis. “He used to always say, ‘Keep that miracle going.’”

In 2013, when the Jazz at Lincoln Center Orchestra with Wynton Marsalis set out to honor the legacy of the Modern Jazz Quartet’s maestro, they teamed up with New Orleans’ own Jon Batiste. The bandleader of The Late Show with Stephen Colbert and a prodigious pianist in his own right, Batiste joined the JLCO to tackle some of Lewis’s most iconic tunes during a sold-out concert in Rose Theater, the House of Swing.

From the blistering bebop of “Two Bass Hit” to the down-home blues of “2 Degrees East, 3 Degrees West”—from small group configurations to the big band might of the full JLCO—The Music of John Lewis captures the elegance and soulfulness of Lewis’s daring compositions. The record also includes a four-movement suite pulled from the Modern Jazz Quartet’s classic recording, The Comedy.

“The depth of his belief makes his music timeless,” Batiste says of Lewis. “For artists, what remains impactful and meaningful in one’s art depends on the accuracy and intensity of your insights. Mr. Lewis's music is still with us, and it is an honor to place my artistry in the tradition of serving it. So put on this record, listen with your eyes closed, and engage your imagination.”