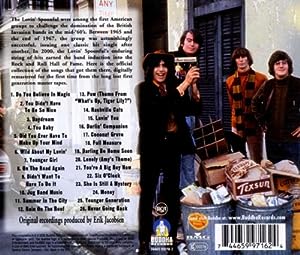 $5.29
As of 2022-06-11 08:54:20 UTC (more info)
Not Available - stock arriving soon
Buy Now from Amazon
Product prices and availability are accurate as of 2022-06-11 08:54:20 UTC and are subject to change. Any price and availability information displayed on http://www.amazon.com/ at the time of purchase will apply to the purchase of this product.
See All Product Reviews

Way more than a spoonful of their best-26 tracks on one CD! This is their first collection digitally remastered from the original master tapes, so their Top 10 hits Summer in the City; Daydream; Did You Ever Have to Make Up Your Mind?; Nashville Cats; Do You Believe in Magic; You Didn't Have to Be So Nice , and Rain on the Roof have never sounded better.

It sometimes feels as though the Lovin' Spoonful have been reduced to a footnote in the history of rock & roll. Yet few of their contemporaries could match the likes of "Daydream," "Summer in the City," and the transcendent "Do You Believe in Magic?"--a song that can still turn January into June. Legend has it that the Spoonful auditioned for The Monkees, and they'd have been good in those roles, having the right candy-sweet sound and a warm humor in constant evidence. But it wouldn't have lasted: lead songwriter John Sebastian was too willful and idiosyncratic, coming on like an American Ray Davies on songs such as "Younger Generation," a prescient meditation on the hippie generation's future parental dilemmas. Greatest Hits is a fine 26-song introduction to a perennially underrated band. --Taylor Parkes

Weapons of Self Destruction