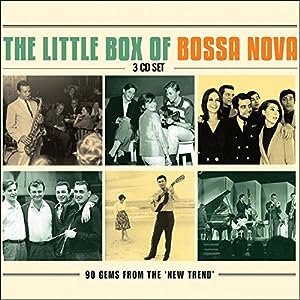 $9.68
As of 2022-06-25 18:33:29 UTC (more info)
Not Available - stock arriving soon
Buy Now from Amazon
Product prices and availability are accurate as of 2022-06-25 18:33:29 UTC and are subject to change. Any price and availability information displayed on http://www.amazon.com/ at the time of purchase will apply to the purchase of this product.
See All Product Reviews

Bossa Nova (''the new trend'') was ignited in the USA by the release, in February 1962, of the Verve Records album Jazz Samba - an inspired collaboration by tenor saxophonist Stan Getz and guitarist Charlie Byrd. The album was comprised entirely (save for one cut) of songs written by Brazilian songwriters then unknown to the American public.

The album's attractive meld of an addictive but gentle, Brazilian-inspired groove with mellifluous jazz soloing resulted in a tasteful and highly accessible confection that the American public found irresistible - so much so that they bought it in their millions and by September 1962 the album had risen to pole position on Billboard's Top 200 pop albums list, and ended up spending 70 weeks on the chart.

Jazz Samba also spawned a hit in the shape of the Antônio Carlos Jobim composition, ''Desafinado,'' which reached No. 15 on the US singles chart and grabbed itself a Grammy for Best Jazz Performance. The rest, as they say, is history. This 3 x CD box set collects together ninety Bossa Nova classics by both Brazilian and American musicians and performers and includes both the familiar - ''Desafinado,'' ''Bossa Nova USA ,'' ''Soul Bossa Nova'' et al - alongside the less successful but equally joyous numbers from the likes of Joao Gilberto, Silvia Telles, Herbie Mann and numerous others. In completion this box set is quite possibly the best Bossa Nova collection available, covering as it does the scenes from the early 1960s - when ''the new trend'' was all the rage - in both its homeland of Brazil and in its adopted territory, the USA.

The Country Side Of Jim Nabors

Turn Up The Quiet