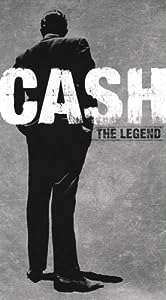 $32.98
As of 2021-12-05 21:04:04 UTC (more info)
Not Available - stock arriving soon
Buy Now from Amazon
Product prices and availability are accurate as of 2021-12-05 21:04:04 UTC and are subject to change. Any price and availability information displayed on http://www.amazon.com/ at the time of purchase will apply to the purchase of this product.
See All Product Reviews

2005 marks the 50th anniversary of Johnny Cash recordings.To celebrate this musical milestone, Columbia/Legacy are proud to release this brand new career retrospective from Johnny Cash that have been completely overseen by their only son John Carter Cash. The Legend presents 104 tracks from 1955-2002 on 4 CDs, complete with 7 unreleased tracks from the House Of Cash tape vault.

There are several Cash boxes available, but The Legend--spanning the years 1955-2002 but concentrating on his long tenure at Columbia and, to a lesser degree, his beginnings at Sun--probably belongs at the top of the list. Cash's greatest strengths are dramatized on these four, thematically programmed discs: Win, Place and Show: The Hits; Old Favorites and New; The Great American Songbook (mostly traditional songs); and Family and Friends (collaborations). For starters, consider the staggering depth and breadth of his repertoire (perhaps matched only by those of Bob Dylan and Ray Charles), embracing ancient folk tunes ("Streets of Laredo"), teen pop ("Ballad of a Teenage Queen"), mature contemporary rock ("Highway Patrolman"), gospel ("Were You There When They Crucified My Lord"), topical fare ("Ballad of Ira Hayes"), country standards ("Time Changes Everything"), novelties ("One Piece at a Time"), and more. Then there's the way his spare, spacious sound opens up to take in horns ("Ring of Fire"), strings ("Sunday Mornin' Comin' Down"), anything. The Legend includes seven previously unissued sides, most prominently "It Takes One to Know Me," a stirring salute to his wife June. --John Morthland NOTE: There is also a deluxe limited edition of The Legend, featuring a lithograph, a bonus disc, and a DVD, and housed in a 120-page, 12" x 16" hardcover book.

Worthy Of Your Name

It Must Be Christmas