The Last Of The Mohicans: Original Motion Picture Soundtrack 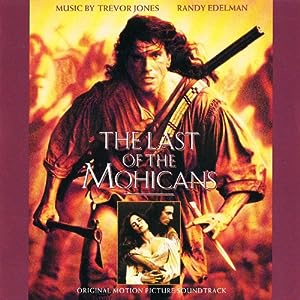 The Last Of The Mohicans: Original Motion Picture Soundtrack

$7.99
As of 2022-12-06 10:52:29 UTC (more info)
Not Available - stock arriving soon
Buy Now from Amazon
Product prices and availability are accurate as of 2022-12-06 10:52:29 UTC and are subject to change. Any price and availability information displayed on http://www.amazon.com/ at the time of purchase will apply to the purchase of this product.
See All Product Reviews

The score for Michael Mann's Last of the Mohicans is one of the most acclaimed works of modern film music. Composed by Trevor Jones and Randy Edelman, these 16 tracks wonderfully convey the scope and majesty of the Academy Award winning film. Features "I Will Find You" by Clannad.

This is a production rife with odd pairings: English actor Daniel Day-Lewis joining up with the Mohawks; James Fenimore Cooper adapted by Michael Mann; disparate composers Trevor Jones and Randy Edelman teaming up. This last pairing seems a suspicious attempt to endow the score of this modern film adaptation of a junior high school literary evergreen with both a golden age of Hollywood dramatic bent (Jones) and a '90s-slick guitar-muzak veneer (Edelman). A strange amalgam that doesn't quite work. --Jerry McCulley