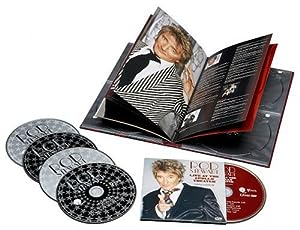 The Great American Songbook Collection contains all four volumes of Rod's groundbreaking series plus a bonus DVD of live recordings and the music videos for 'These Foolish Things' and 'Time After Time'. J Records. 2005.

Often as people age, they grow more interested in ancestry. Rod Stewart's musical family tree certainly includes the great crooners of the past--those who took the pop songs included in his Great American Songbook series and turned them into standards. It's fitting, that he should find a late middle-age career revival by paying homage to the music that paved the way for rock clubs, discothèques, and screaming groupies the world over. Stewart's series has only grown stronger since it debuted with It Had to Be You. Most vocalists could spend sleepless nights trying to figure out how to make "Until the Real Thing Comes Along" their own. It's no problem for Rod. His jetsetter barring coupled with that unmistakable, husky voice is more than enough for him to leave his own stamp on the songs. And with the addition of guest stars from Cher to Chaka Kahn, well, there's a little something for everyone… especially those who remember when "Do Ya Think I'm Sexy" was haunting the charts. For fans who sampled and loved a portion of this collection, the box set is a handsome addition to their library. It contains not only the four American Songbook CDs, but a DVD sampler of concert footage. (The set says "Big Band Era." The saxophonist in the mini skirt says it's a Rod Stewart show.) There's also a booklet of glamour shots featuring Rod and one or more leggy blondes, and notes on Stewart's musical career. Rod doesn’t quite convey the ease performing these tunes on stage that he does on the CDs, and the bio is far from unbiased, but who can help but love this music? Especially for sentimental reasons. --Leah Weathersby

World On A String [4 CD/DVD Combo]