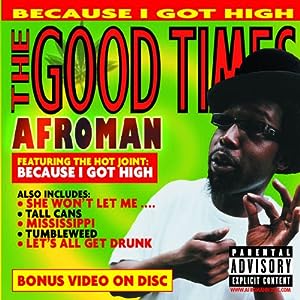 $6.01
As of 2022-09-22 07:48:50 UTC (more info)
Not Available - stock arriving soon
Buy Now from Amazon
Product prices and availability are accurate as of 2022-09-22 07:48:50 UTC and are subject to change. Any price and availability information displayed on http://www.amazon.com/ at the time of purchase will apply to the purchase of this product.
See All Product Reviews

Cross 1970s smut poet Rudy Ray Moore with '90s comedic rappers the Afros, marinate them in malt liquor, and what do you get? Afroman, the first hip-hop-flavored novelty act of the 21st century. The self-proclaimed hungry hustler's unabashed take on American rap from a blaxploitation point of view consists of a laid-back delivery and funky yarns loosely flowing over wah-wah guitar grooves and Hammond organ riffs. It's guaranteed to amuse some listeners and offend many, many more. One glance at The Good Times' track listing should help you decide into which camp you'll fall. The subject matter of tunes such as "Because I Got High" (also featured on the Jay and Silent Bob Strike Back soundtrack) and "Let's All Get Drunk" is readily apparent. But it's all good in the 'hood. Afroman and crew sound like they're having a great old time laying it down, and at least one song on this album will make you laugh. --Rebecca Levine

Waiting for the Electrician Or Someone L...