The Final Rip Off 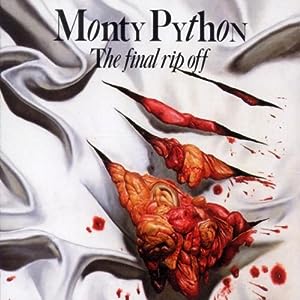 The Final Rip Off

$11.06
As of 2021-04-22 15:55:07 UTC (more info)
Not Available - stock arriving soon
Buy Now from Amazon
Product prices and availability are accurate as of 2021-04-22 15:55:07 UTC and are subject to change. Any price and availability information displayed on http://www.amazon.com/ at the time of purchase will apply to the purchase of this product.
See All Product Reviews

This is it--the one Monty Python album that you must have. A compilation drawn from various films, TV series, and performance sketches, The Final Rip Off consists of two CDs of absolute classics. One of the very first tracks is the famous "Constitutional Peasant" scene from Monty Python and the Holy Grail. Also included are "Spanish Inquisition," "Argument," "Lumberjack Song," and several other sketches that have achieved much-deserved pride of place in popular culture. The members of Monty Python are quite aware of this--the much-loved dead-parrot sketch is listed here as "Parrot (Oh, Not Again)." It's a testimony to the artistry, not to mention timing, of the group that the great majority of this stuff is still funny after decades of wear. --Genevieve Williams

Button Down Mind Strikes Back